Apple’s privacy labels update revealed that WhatsApp and Facebook Messenger collect a huge amount of user information and data compared to other messaging apps including Signal and Telegram. The signal app is one of the most private messaging apps that does not collect any user data, as shown by the privacy details highlighted on the App Store. Concerning the display of privacy labels by Apple, Facebook had earlier criticised the move.

The details shown on the App Store show that Facebook Messenger leads the chart, followed by WhatsApp. Some of the data collected by these apps include users’ purchase history, financial information, location details, contacts, phone number, email address, and usage data, among others. Users can even see these details on the App Store on their iPhones.

Following Facebook, WhatsApp also separately criticised Apple for implementing anti-competitive policies. It also provided some clarification on its user data collection through an FAQ. However, the list shared online suggests the reason for criticism and accusation.

The privacy labels on the App Store are based on the self-submission made by developers to Apple that does not get checked manually. However, companies including Facebook provide such details in their privacy policies as well that aren’t read by a large number of their users.

The Most Frequently Asked Questions On SIP Trunking In 2021 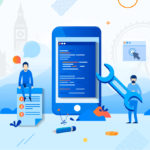