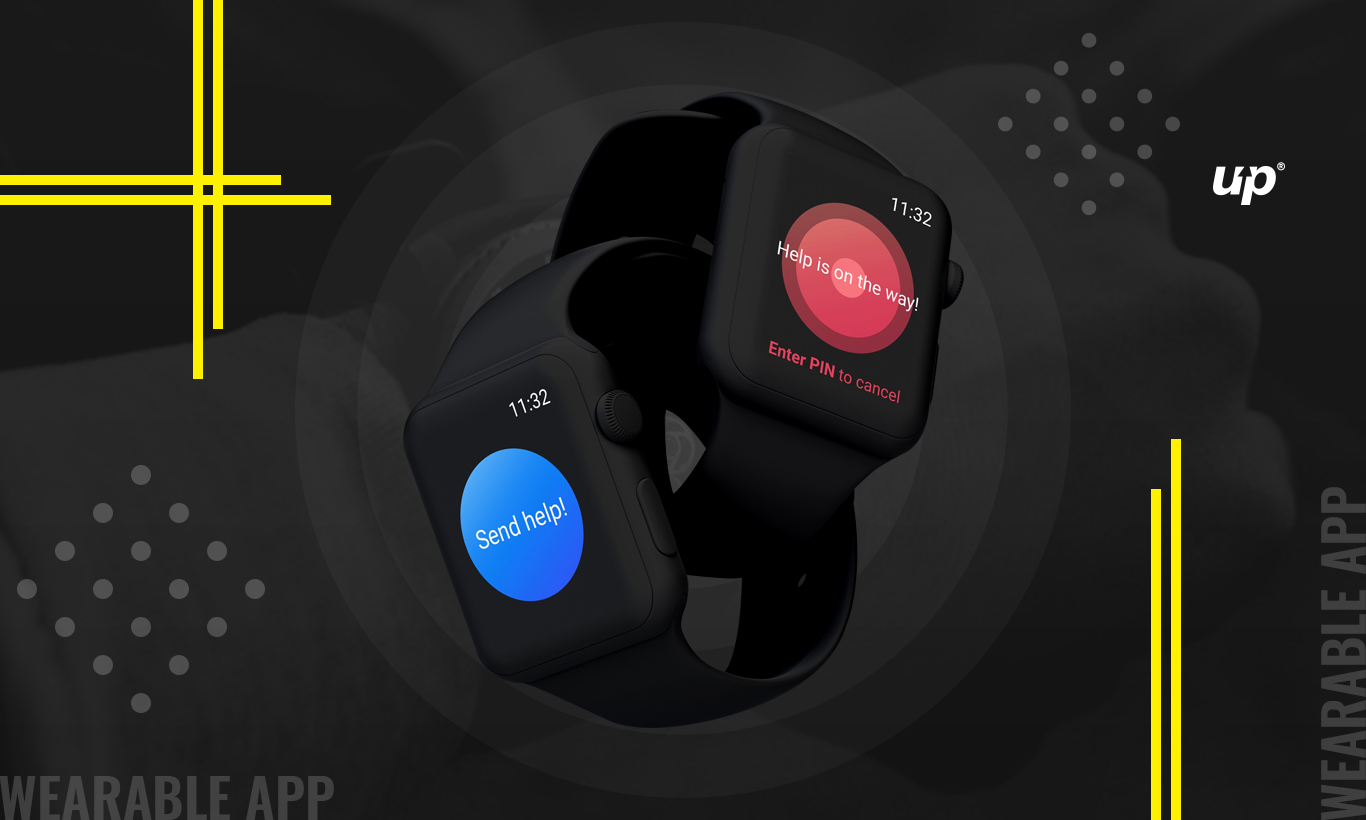 Just like AI and Machine Learning; Wearable too was limited to sci-fi movies. But over the past few years, we have witnessed the greatest feat in the Wearable app development industry. Not a while ago when apps were just limited to mobile phones, we came across such devices that can be worn just like a wristwatch and it was just a matter of time, when the app development industry decided to make apps for these devices.

Since then, wearable technology has been undergoing constant development. And today we’ve got almost all the apps that we used to have on smartphones only. Here we have listed some of the best apps available on such devices. 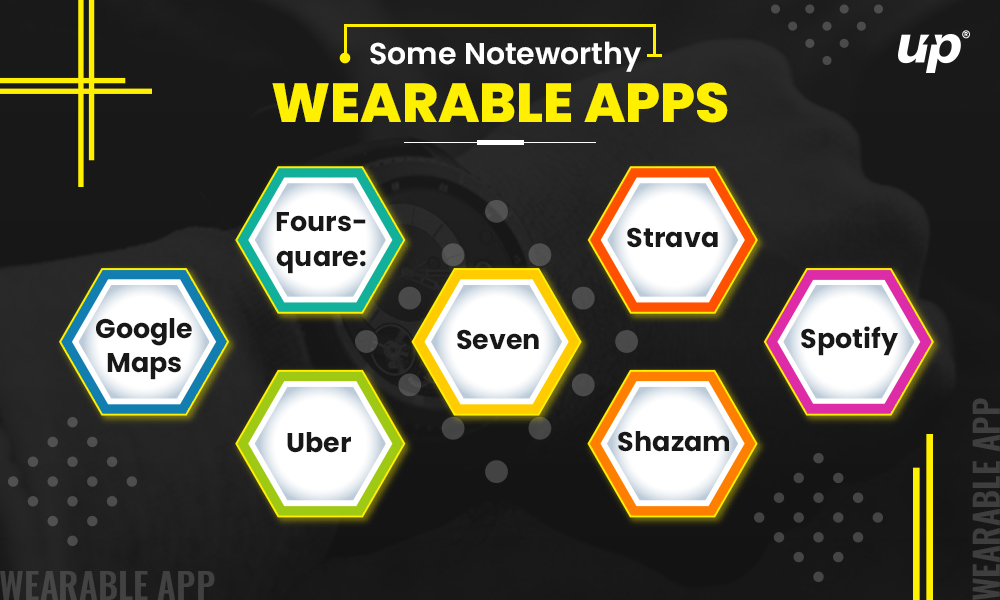 Google Maps: The app needs no introductions whatsoever, as it is probably the only navigation app that most of us use.

Foursquare: Are you looking for a restaurant or a bistro nearby? If yes, then Foursquare app is just for you.

Uber: Call for a ride straight from your smartwatch. What could’ve been easier? Right?

Seven: A perfect exercising companion you could ever ask for. With amazing interactive animations, this app is a must-try.

Strava: Yet another exercising companion, but on social media steroids. What does it mean? Well, you can share your progress with the world.

Shazam: What’s that song playing over there? Use this app to identify it in just a couple of seconds.

Spotify: The smartwatch application lets you access your playlists and music controls. Ideal for Chromecast.

This right here is probably the most important trend that you don’t want to miss out on. With IoT’s dominance over different industries, wearable has become yet another victim of its widespread. More specifically, IoT is being used for ensuring safety in the industrial sector, improving the quality of services in the healthcare industry, and enhancing operational efficiencies in the manufacturing industry.

Since we are talking about wearable app trends, it would be totally wrong for us not to mention its integration with GPS technology. Over the past few years, we have witnessed extensive use of GPS over wearable devices, and apparently, it has completely revolutionized the whole concept of these devices. The GPS-powered wearable apps are said to be providing on-point direction to whatever the destination you are looking for.

You must be thinking that wearable technology isn’t that new in the healthcare industry, well, you are not wrong but, ever since the inception of smart wearable IoT, we’ve seen a major difference in healthcare. Apart from helping practitioners to track down patient’s vitals, these apps let them carry out more advanced diagnostic processes. Moreover, the technology is being used for incorporating artificial limbs, operating wheelchairs, and many more to come in the future.

To this date, smartwatches have made things quite clear that technology is something that can’t be tamed. Smartwatches are now becoming more and more advanced, which is something app development companies need to worry about, as they cannot leave behind. With all the trends being shown to the world, companies have got to provide the best in class services. Talking about services, they can make wearable apps to work with smart devices, specially made for homes and workplaces.

Data security is something that has always been an area of concern for most of the people. But, now that wearable devices are becoming more advanced, we can expect data security to get fully resolved in the coming future. Nowadays, app developers are working on making such apps that can be integrated with wearable tech along with providing best data security services and protocols. Keeping all these facts in mind, businesses should never ignore this aspect as data privacy and security is something that an app is incomplete with.

Ever since the day we came across online payment portals, we have accustomed to making every possible purchase online, it doesn’t matter whether it is done from a computer or a smartphone. Since we are here talking about wearable tech, app developers have made things quite easy as online payments are now possible with wearable apps. So, if you own a smartwatch, then make sure to use Google Pay or Apple Pay to make payments.

Apart from enhancing the user experience, wearable apps are making things easier for businesses out there and providing them with more expansion opportunities. Now, you must be thinking “how’s it even possible?” gadgets like smartwatches allow them to access information like location and spending habits of their specific target audience.

The Rise of Beacon Technology

This is hands down the trendiest tech that is making an impact on the wearable technology. The integration of beacon technology is helping wearable devices to use Wi-Fi and location-based services which are resulting in satisfied customers. The beacon technology has proved its importance especially for all the businesses out there as it enables them to create and retain customer base.

As far as it is a trend, interactivity is more of a challenge right now. The reason being, the screen size of devices are becoming drastically smaller with new releases. Things are getting out of hands for app development companies as it has become quite complicated to add interactive tools such as vibrate and voice control in wearable apps. Wouldn’t it be great to have such wearable apps that can send messages and draft emails just with voice commands?

Now that we are done with wearable app trends, it wouldn’t be right for us to close out this article without mentioning some of the best wearable devices that you can get your hands on. In the following list, we’ve put together a combination of smartwatches and dedicated fitness trackers.

Manufactured by none other than Apple itself, the Series 2 watch comes packed with on-display notifications and Siri integration. The watch has 1.5” display, 18 hours of battery life, and direct fire speaker and microphone. The watch will cost you around $280.

The wearable device does look like a watch and quite a nice one actually. The watch can connect with your phone, which makes your life “on-the-go”. Other than that, it supports fast charging, and being a Bluetooth and Wifi-enabled device, the watch comes in with Android wear compatibility. The price on this watch does seem to fluctuate, but as an estimate ZenWatch would cost you around $200.

When it comes down to reliability, one cannot go wrong with Casio. Being a dominated brand in the watch world, Casio’s WSD-F10 is a military tested model that the U.S sanctioned. The watch has compass and altitude readings which definitely will attract wanderers. Moreover, it lets you know speed, distance, atmospheric pressure, and changes in weather. To avail such features, you need to pay the amount of $390.

Fitbit is one of the best brands that you can ever think of as it makes the most reliable fitness trackers out there. Another aspect of Fitbit is its community which likes to compete and keeps you going at all times. As far as the watch is concerned it comes with a battery life of up to 7 days and costs as low as $75.

So, those were some of the best wearable devices that you need to purchase. Wearable tech has become quite a thing that could help us a lot in our daily lives.

Are you planning on making an app that can help you grow your business? If that’s a yes, then this is the right place you are looking at. Share your idea with Fluper- Best Mobile App Development Company in Las Vegas, and we’ll do our best to turn into reality.