The History of Android: A Version-wise Study of its Evolution

Google has recently launched Android 12 Beta version in May 2021 and with this, Android versions have the maximum number of smartphone users on its operating system with over 71% of users worldwide.

Primarily, the Android concept was launched in 2003 when Andy Rubin, Rich Miner, Nick Sears, and Chris white launched this concept for the first time. Initially, the Android Inc. was a project launched for digital cameras but as there was negligible participation from the users in the field of digital cameras, Google acquired Android Inc. in 2005 and allowed Andy Rubin and his team to lead the project. The team of developers came up with a smartphone platform supported by Linux kernel.

By 2008, Google planned to make smartphones touchscreen and on September 23, 2008, HTC launched its first-ever Android smartphone HTC Dream featuring Android 1.0 that kick-started the journey of Android that never looked back since then and is now serving almost 72% smartphone users worldwide.

Let’s dive little deeper into list of Android version and explore its journey on how it became the most popular smartphone operating system in the world. 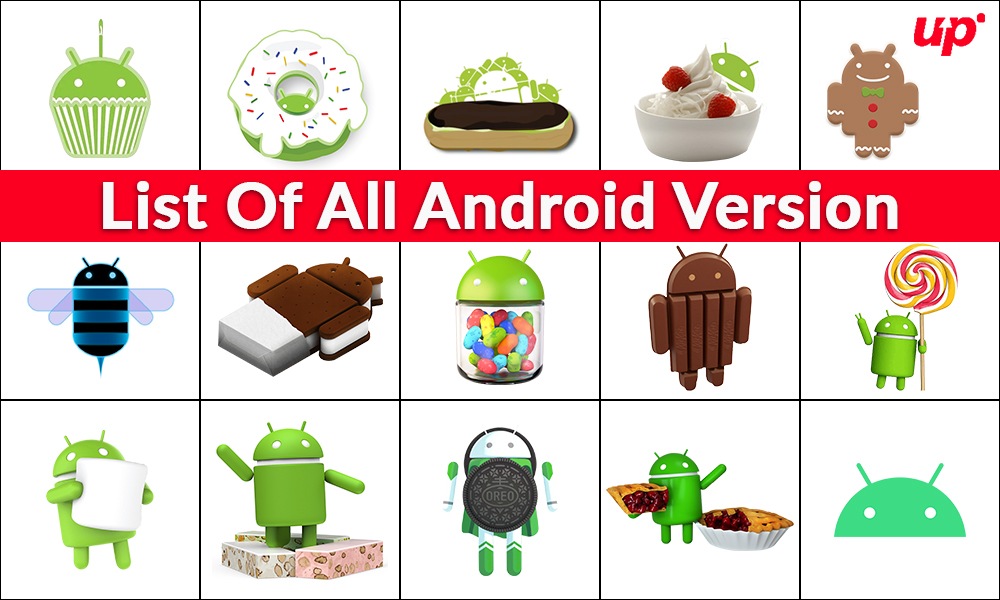 Android 1.0 version was launched on September 23, 2008 by HTC where it allowed users to download applications and get updates on the app market. It included some basic apps like YouTube, Maps, Calendar, and others and had no code name.

The Android 1.5 Cupcake was the first OS to provide on-screen keyboard in the Android history. It has also got widgets for third party apps and came up with video recording feature for smartphones.

In 2009, the Android Donut version has a significant impact on the history of Android versions. It came up with an updated CDMA feature that boosted its popularity throughout the globe. This version also supported various screen sizes and resolutions which played a crucial role in Android operating system development.

Just after 5 to 6 weeks of the launch of Donut, Android 2.0 entered the market and after a couple of months, came the Android 2.1 version. The Android Éclair version introduced voice-guided map navigation systems along with some other interesting features. It also brought live wallpapers in existence along with speech-to-text feature. It also added a pinch to zoom feature in Android that was earlier featured by iOS only.

Just after four months of the release of Android 2.1 version, Google came up with another updated Android version. This version basically proved to be a performance booster for smartphones and for any Android app development agency. It brought voice actions in existence such as tapping the icon and making notes. As the languages at that time were quite limited, the Froyo version enabled Flash support and Android web browsers.

The gingerbread update was launched by Google in the year 2010 facilitating clean and sharp UIs for smartphones. Moreover, it supported Near-filed communication features. It also supported front-camera and included a task manager shortcut on the home screen. There were some new audio effects like reverb, equalization, headphone virtualization and bass boost.

Both these updates were exclusively launched for Android tablets. Motorola Zoom models were the first tablets to feature this update where it had a redesigned UI focusing on maximum utilization of screen space on Android tablets. Android tablet app development also gained much importance after the launch this updated version.

This update was released in 2011 with a key focus on visuals and Android UI. It introduced the “Holographic” concept and kept using the blue-colored theme with some additional gestures like swiping away apps to close them.

This version is known for its shortcut feature for Google Now. Users can swiftly swipe the home screen and access the Google Now app to get information for other apps. This feature became the base for Google’s future assistant applications that came up with Android operating systems.

Now this is where Android smartphone users got rid of those black and blue-themed UIs. Google introduced some neutral colors and light background options with this Android version. There were some clock improvements, new framework for UI transitions, and Native Infranet blaster API.

This update was brought along with Nexus 6 models and also introduced the concept of “Material design” which has been followed till now in some limited Android phones. This update replaced the traditional Dalvik VM feature with Android Runtime for enhanced efficiency. Android app development gained significantly after the launch of this updated Android version.

This version of Android introduced “Now-on-tap” feature and laid the foundation for annual Android update release trend. The app menu was redesigned significantly under this version along with some minor modifications in UI. It also added a widget on the home screen with much improvement in security measures and other protocols.

In 2017, Android Oreo came up with some advanced features allowing multi-tasking for Android phone users. It introduced a picture-in-picture split-screen feature for supporting apps. The users were able to turn on and off the notification channels along with the ability to snooze notifications for a particular time period. Android game app development also gained a good hype after this version.

This update is also known for its visual modifications in UI and it also replaced the three-button set up with a single button for multi-tasking. The UI included gesture control functionality along with a “Digital wellbeing” feature that kept good track of users’ behavior. It can easily offer information on how long a user has used phone along with the data for each app separately.

This version marked a milestone in the history of Android Operating systems. Google made an announcement stating that after this version, no Android versions will have code names except the numbers representing the version. This version also came up with a new logo and color scheme for OS. It included a system-wide Dark Mode to extend battery life and making screens safer for eyes.

This advanced Android version was launched last year with all significant support features for smart devices and for any app development company. Some of its major updates include notifications for messages along with freedom of screening them without opening the app. It allows you to make apps request permissions every time you use them. The updated version also makes sure that installed apps cannot fetch any information related to other installed apps in the device.

This is an Android version for 2021 that was launched in May, 21. The new design developments made under this version will affect mobile apps along with Google services. The smart UI features allow users to customize themes according to their wallpapers. The second Beta version was released in June 21 whereas the fourth version of Android is expected to be launched in the market till August 21.

The journey of Android has come a long way from basic UI limitations to visually enriched interactions and user experience. These days, modern devices are coming with high-end hardware capabilities which will definitely support more robust and swift app development in the future.