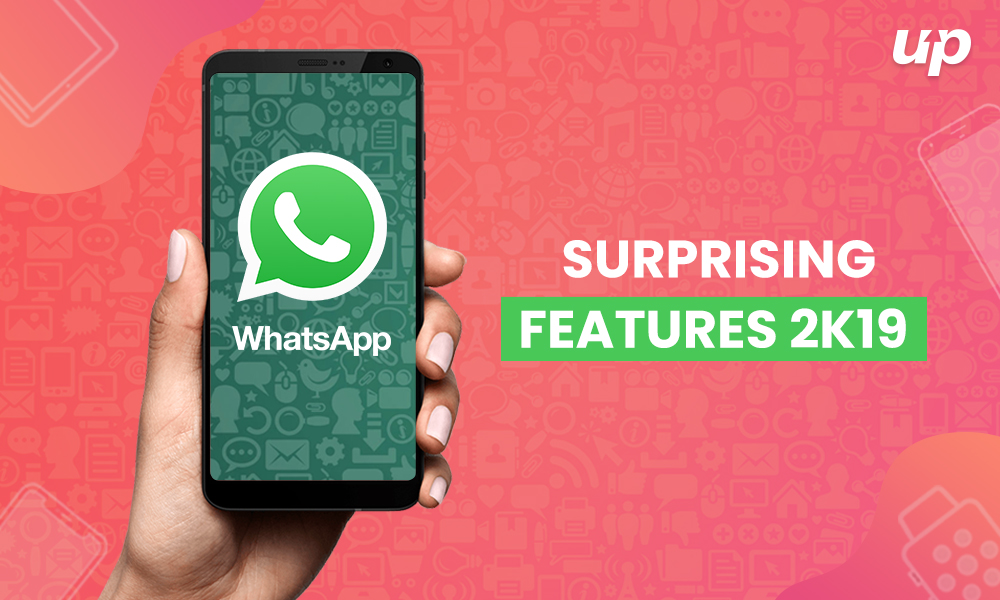 WhatsApp Surprising Features Going to Hit the Market in 2019

WhatsApp is undoubtedly the most popular instant messaging app with over 1.5 billion users across the globe. Over the years, the Facebook-owned app has evolved into one of the most appreciated messaging platforms in the world. Reason? Obviously, one of the prime reasons for WhatsApp’s rapid growth is its free to use nature and on this, users have to get new tools and better features from time to time. In 2018, WhatsApp has been improved with features like picture-in-picture mode, swipe-to-reply, group video calls, payments and Sticker support. Considering this, top mobile app developers have also started introducing new features to the apps they built. If we talk about WhatsApp, that is not the end of the line. The popular messaging app is slated to get some more features and they will drastically upgrade your messaging experience.
Now, with 2019 just being started, users are predicting and even they have an idea as to what the folks at WhatsApp are planning to introduce this year. Today, I thought to research about the upcoming features on the app and results were incredible! In 2019, WhatsApp is also going to bring many features. In this blog, I am going to talk about some astonishing features, which you will see in 2019.

Popularity of WhatsApp Across the World

Before directly jumping to the features, I would like to put some light on the increasing demand of the WhatsApp worldwide. As of January 2017, the mobile messenger has more than 1.2 billion monthly active users worldwide and ranks as one of the popular social platforms globally. Recently, leading statistics portal Statista has revealed figures on most popular messaging apps worldwide as of October 2018, which is based on the number of monthly active users. As of October month, 1.5 billion users were accessing the Whatsapp app on a monthly basis. 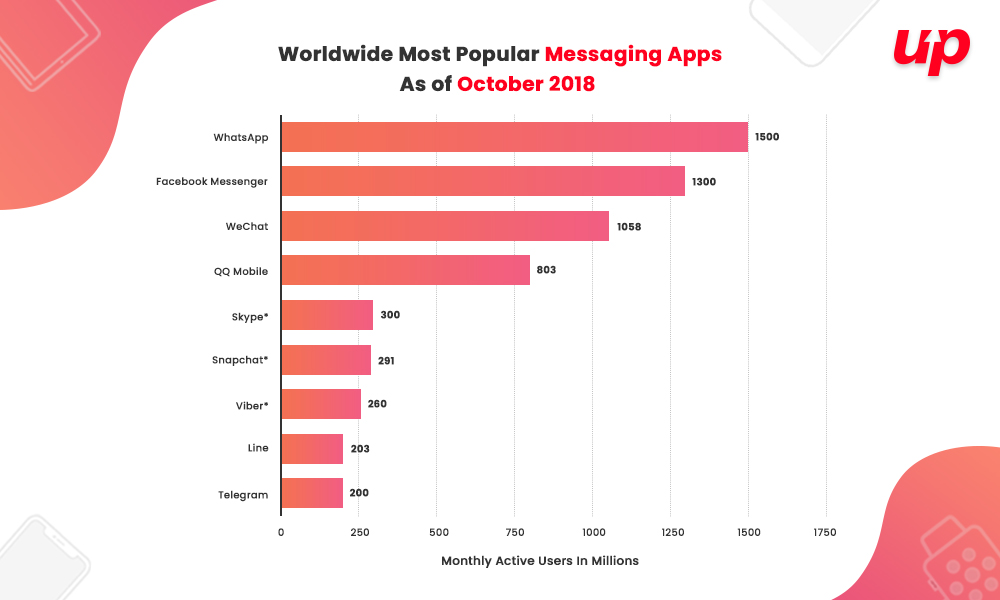 As seen in the graph, Whatsapp owns the throne with 1.5 billion users worldwide. Yes, there are several instant messaging apps developed by top mobile app development companies, but the popularity of WhatsApp is unbeatable! 97% of all Smartphone users in emerging economies like India use mobile Apps for daily communication. For 90% of them, WhatsApp is their first choice when thinking about Messenger Communication. 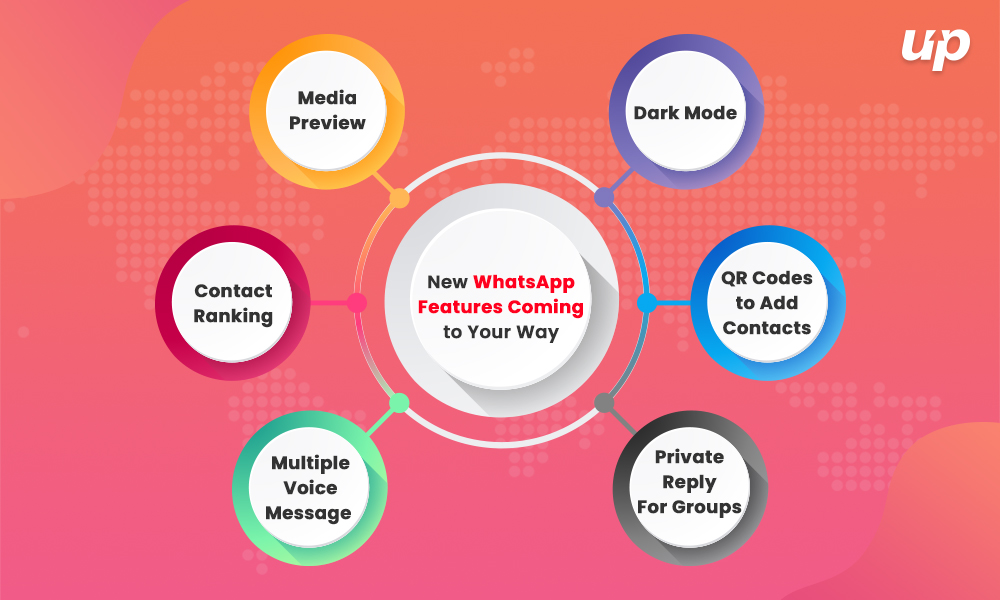 One of the most interesting and demanding features on the app is Dark mode. It will let users enjoy a darker theme on the app thus reducing the strain on their eyes in low-light conditions. It will also help save battery by reducing battery consumption. The Dark Mode feature was a well-liked one among all social media, streaming or any such platforms as Facebook and YouTube launched their respective Dark Mode feature in 2018. Now, WhatsApp has finally decided to launch this feature for the users.

As the name suggests, you can listen to multiple voice messages once in a chat. You just have to play a voice message, the messages after that will be played on your own. You do not have to click on each audio note separately. This unique feature is currently available on the beta version. This feature is available for iOS users on Beta version 2.18.100 and for Android, these versions are available at 2.18.362.

In 2019,iOS and Android app developers of the company introduced a new feature of QR code facility on WhatsApp. It is one of the coolest features users will see in the application. With this feature, you will be able to add new contacts through a QR code scan. Along with this, you will be able to share your contact through QR code. It is important to note that both the senders and receivers need to have the latest WhatsApp version to be able to scan the QR Codes.

Another amazing feature that user will love for sure is ‘private replies’, for “WhatsApp Groups”. WhatsApp’s reply feature has been there for years, but with the newest beta of the app service (v2.18.355), you can even send private replies to group messages. Users can privately chat with other members in the group itself without opening a separate conversation. Users can chat in “Groups” in a private manner without the knowledge of other members.

Read More : Revealing the True Factors behind a Successful App

There are only a few people on your chat with whom you interact a lot. Keeping this in mind, another interesting feature has expected to come in WhatsApp soon, i.e. “Contact Ranking” feature. Through this feature, the app will make a list of the user’s contacts and rank them according to the volume of interaction between them.

It is well known that push notifications are getting smarter day by day. Android and iOS mobile app development companies are constantly working to improve the user experience with the help of notification features. The Media Preview feature of WhatsApp will allow users to preview any media (video, image or audio) directly via their smartphone’s notification tray. With this feature, users will simply need to swipe down on the message in order to view the media content without the need of opening the WhatsApp app. The feature has been spotted only on iOS but is expected to hit Android devices as well.

That’s all! I am sure that you will be looking forward to utilizing these new features. WhatsApp would roll out these new features gradually and users should have the latest version to enjoy them. Looking at the above features, it would not be wrong to say that WhatsApp is rapidly working to ease the services for users. For every WhatsApp user, these features will be highly beneficial. If you are also looking for the best app developers who can comprise such smart features in your app, then connect with
Fluper and get an impeccable app! 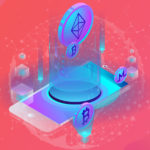