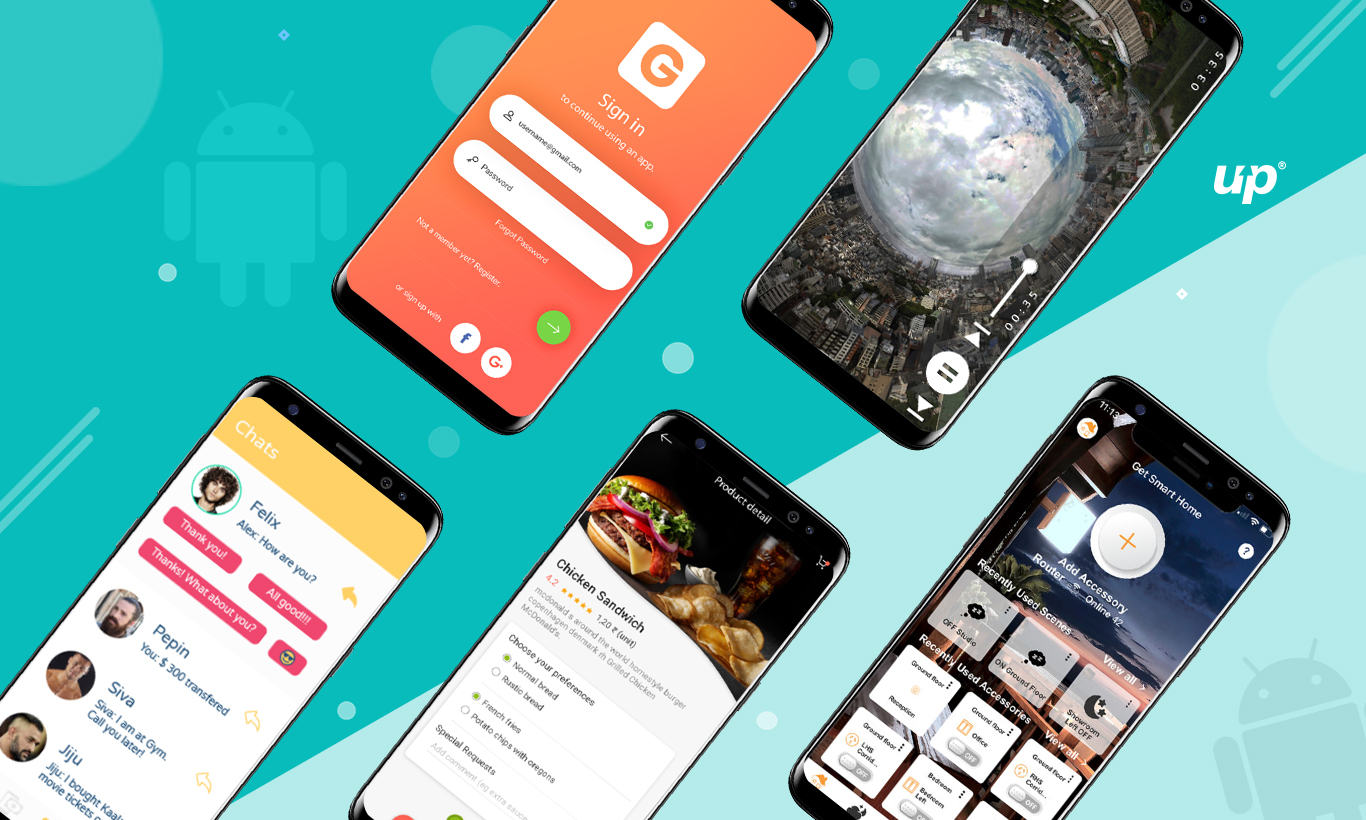 Currently, I don’t think that anyone could imagine his or her life without his or her Smartphone. Obviously, there is a strong reason for that! From waking up with a morning alarm, using WhatsApp, listening to music, reading News, watching YouTube videos, to checking mails, updating project status of your office and so on, everything is seamlessly executed from your mobile devices. This is simply possible because your Smartphone is loaded with several useful Android applications. According to the statistics, there has been a massive 254 Billion Android app downloads in 2017 alone, and the bar is going to increase in the coming years as well.

Considering various developments in the Android market, people are becoming more curious to know that what’s exciting and innovative is running through the mind of android developers. If you have an amazing idea for an android app and you don’t want to miss any information which is trending in the Android world, then you are at the right place! Yes, before you hire an Android app development company for yourself, you should know what app trends will rule the Android world in 2018. Here, I am going to discuss 6 android app development trends which will give you a better insight into what should be on top in the year 2019 and beyond.

Have a Look of Top 6 Android App Development Trends 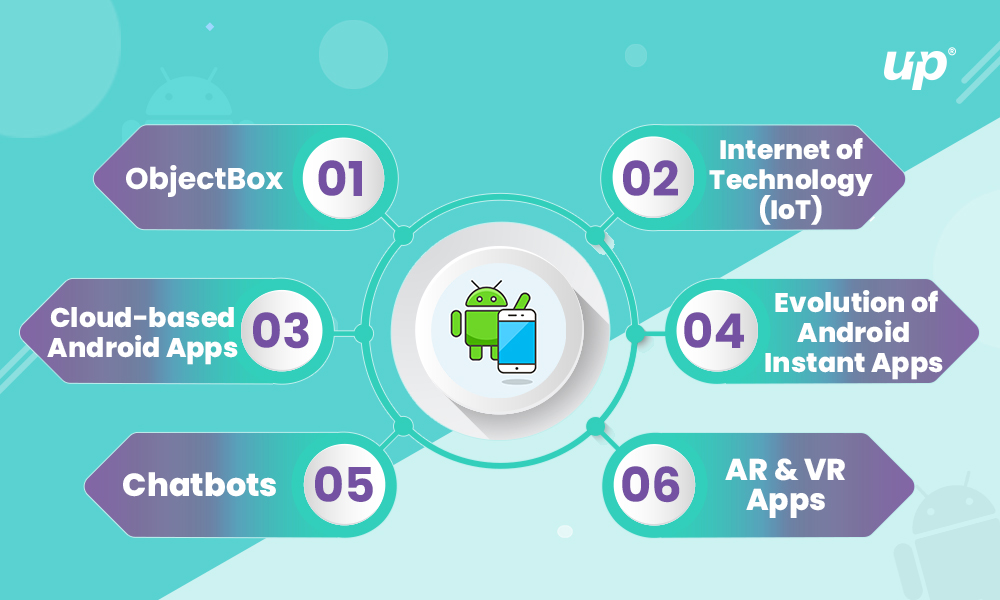 ObjectBox is a database management system, which was released in a stable version in September 2017. This is primarily built to give a solid boost to the app performance. One of the prime features of the database that one should definitely not miss is its support for Multiversion Concurrency Control (MVCC), which allows simultaneous and extremely secure transactions via online apps. ObjectBox further ensures compatibility with newest trends like reactive programming, Kotlin language and Android Architecture components.

With the advent of the Internet of Technology, you could not even imagine that how your life will become easy with the help of connected devices. Many of you have already been aware of the term IoT, if not then let me tell you that IoT has empowered all of us to easily control the home appliances like refrigerator, TV, toaster or treadmill right from our smart phones. Presently, powerful platforms like Android have made it possible. The Android application development professionals should ensure that the apps have an efficient and secure backend that can facilitate smooth user communication with the device.

While various home appliances and devices are already controlled via apps, tech giant like Microsoft is working on integrating whole cities with IoT technology. If it gets to success, it would be a great asset to the tech industry.

Cloud is buzzing in the tech world, mainly because the amazing benefits it offers. Every business deals with crucial data and information that needs to be secured. With a cloud-based app, you can allow businesses to access their data anytime without distressing about the safety of the data. In the mobile app industry, developers can easily create Android applications powered by the cloud technology and reap the benefits of cloud technology like faster time to market, affordability and agility. If you research, then you will find that many mobile app development companies are offering such apps to the clients. If you have any plans to have a cloud-based app for your business, then 2018 could be a great year because there are several ongoing advancements in cloud technology are there, which makes it more powerful.

As the name implies, instant apps can be accessed right away with no installation or download needed. In fact, if we look in deep and try to find that how it will fare in future? Then, there is no doubt that Instant apps are predicted to gain enormous growth in 2018 and onwards. Android-based instant apps give user the power to view app content, which they actually need and that is how it saves your mobile space! Just find it in the Play Store and click ‘Open App’. Recently, Google has added a “Try it Now” button to the Play Store for some Android Instant Apps.

These apps are fully integrated with functions just like websites and prominent names such as Buzzfeed, Vimeo, Periscope and NY Times have their instant apps on Google Play Store. Considering several benefits of instant apps, I would definitely suggest that if you are planning for Android app development this year, ensure that your app is compatible with this feature.

Chatbots are rapidly evolving technology in the world of mobile apps. In the current time, more industries are looking to adopt chatbots technology in order to improve customer interaction, better engagement and improving sales scenario. You all have been aware of the Apple’s Siri feature, and apart from that Amazon’s Alexa and Google’s Duplex are popular example of tech giants highly spending in bots technology, which offers quick communication between technology and humans.

The topic is actually not new, but yes for the mobile gaming industry, it came out as a fortunate thing. If you are game freak, then you will surely remember the game that surprised the mobile gaming industry in 2016? The game was Pokémon Go! With more than 650 million downloads, this game became one of the most popular VR games on Android Play Store. Considering its wide scope, several fields are experimenting with AR and VR to expand its reach. In the same way, VR has been integrated into apps of industry giants like IKEA. Samsung Gear VR and Oculus are other popular examples Artificial Reality. It has been predicted that both AR and VR technologies would significantly contribute to the app development industry in 2018.

What could be more exciting android users see than these amazing trends? The scope of mobile app development is eternal and the year 2018 will show to be a breakthrough for various apps. In fact, this creates an opportunity for you to power these android app development trends of 2018 to steal the show with your dream app. If, an in-house app development team is not an option for you, then consulting with the best mobile application development company could help you to achieve the expected results with the help of a user-friendly and technologically advanced Android app. Finding Love In A Digital World – The Rise Of Dating Apps