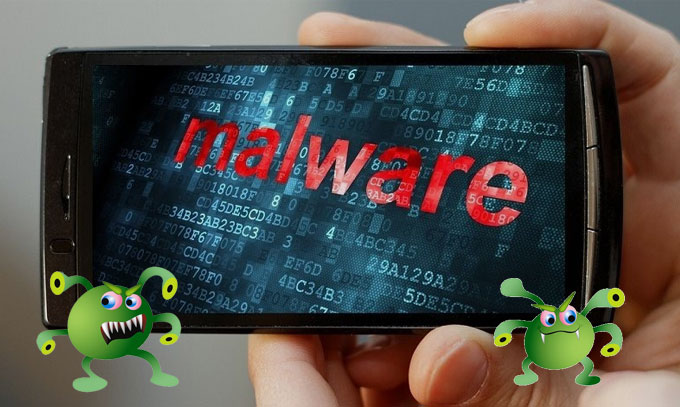 Your Mobile is at Stake, these Malwares Can Paralyze Your Smartphone

Just like virus malware is malicious software that targets smart phone and digital assets by either collapsing the mobile apps or by leaking the confidential information. Recently digital attacks has increased that caused huge stress among the mobile users because these malwares not only damage mobile phones but also slows down the speed of a phone there are some dangerous malwares from which you have to keep your smartphone away.

Even if you discuss with a 16 years old teenage about it he will be able to explain a lot about it, having Trojan in mobile phone is like a nightmare comes true, earlier it only used to target computers but now its mobile version has also invaded in to damage your smart phone.  Trojan can crashes mobile phone, deletes files, corrupt data, blocks anti-virus program and deactivates other applications.

Ghost Push is a kind of malware that mostly attacks Android operating systems by downloading malicious software automatically, it is a kind of malware that is very difficult to detect and remove. Once it invades in your mobile it will start downloading unnecessary apps automatically and sometimes download other malwares when you will activate internet on your mobile. There are some cases in which Ghost Push has damaged battery and stolen personal data as well.

Spyware mostly doesn’t damage mobile phones or applications but it works as a spy that detects your personal files and steel information without your knowledge, these viruses is often used for the purpose of hacking.

Warm is a misleading virus that may invade your mobile phone via text message, MMS and it doesn’t require any interaction from you. It contains harmful and misleading instructions and it spread over one device to another device. 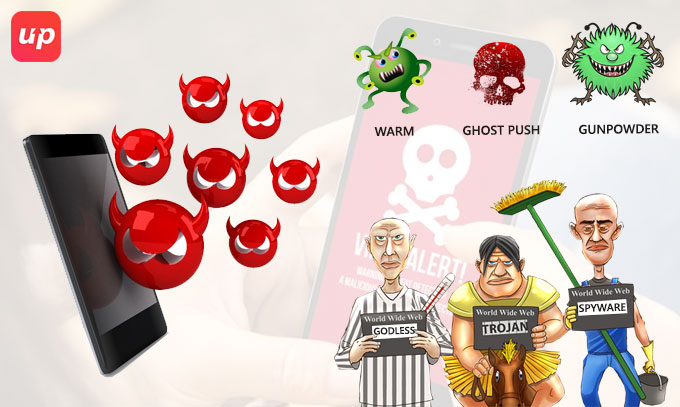 It became infamous in June 2016 and a lot of headlines and blogs were written on it. It automatically downloads and steals information from mobile. According to research report by cyber Security Company check point it has affected more than 3 million devices worldwide. It invades on mobile when user surf or visits suspicious websites.

Godless virus is found in Google Play Store, it is extremely dangerous virus that defects mobile device quickly and efficiently. Godless is a different kind of virus it damages phone’s screen switches off.  It is found in Android 5.1 or lower version of Android.

Gunpowder is a malware that is found outside the Play Store and targeted through third parties. It Contains many features of adware and has targeted more than 13 countries including India since 2014. From the observations it was found that it infiltrate into mobile during online payment through paypal, moneybookers, and CYPay. Malware also steals browser’s history, bookmarks and other private information.

This notorious virus entered in malware’s family in late 2015, it will root your mobile and leave it open in stream of advert and very difficult to remove it entirely.

How Malwares Harm you and your Phone?

But don’t be intimidated, there are some tricks and antivirus that will help you to get your mobile rid of these viruses.

It is the easiest way to remove malwares from smart phone. Go to setting menu then select apps or application manager, then you will be landed on the list of all mobile apps then uninstall malware apps.

Clean up Junk Files of Mobile with Cleaner:

There are various antivirus available in internet that is found really effective to remove these malwares from mobile like Kaspersky, Quickheal, AVG, Mcafee etc. and most of the Android App Developers always recommend users to install and update anyone of above to keep mobile protected from malwares.

It was researched by the Top Mobile App Development Company that a lot of cyber criminals have used router for cyber attack by redirecting android users to another websites or malicious apps, so by keeping router reset time to time can be really helpful.

It’s very irritating to face any virus or malware but it is a part of operating systems and by taking some initiatives it’s not very difficult to prevent these insects. 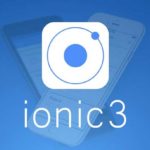