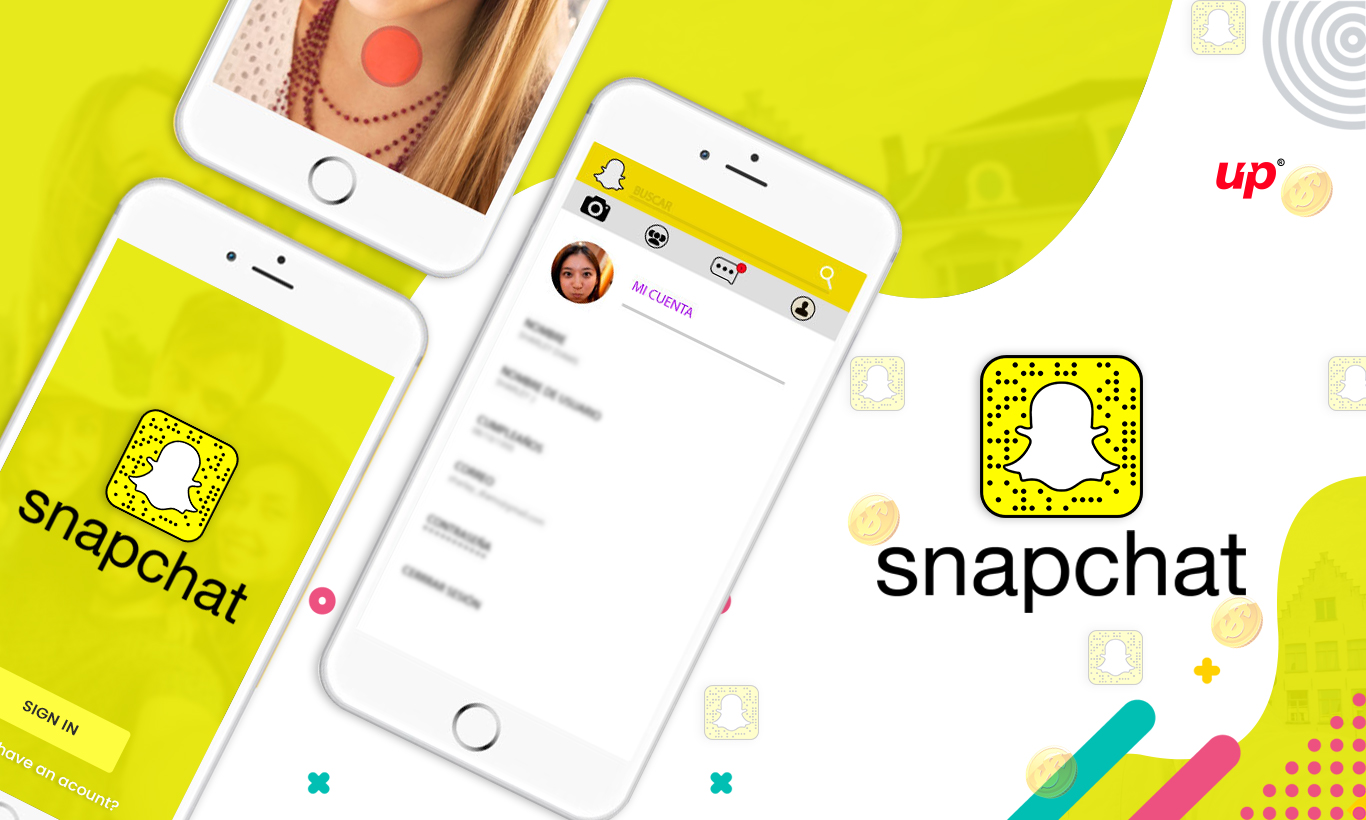 How much does it cost

In the social media industry, there are only quite a few names that have made a huge impact, one of them is Snapchat. Being a multi-million dollar social media platform, Snapchat has gone through a lot of changes which only made this app one of the favorite ones among us.

As of 2019, Snapchat has more than 190 million daily active users, whereas it had 187 million users in 2018. The app is available for Android and iOS-based smart phone devices. The app runs on a concept in which any picture or video that you send-by default- is made available to that receiver for only a short period of time before it becomes inaccessible.

Now, in this blog, we’ll be discussing Snapchat’s features and some of the factors that a mobile app developer keep in mind before giving out an estimate on making an app just like Snapchat.

Read Also:  How to start a meal prep business?

Being a popular social media platform, Snapchat has got user spread all around the world. Here we’ve given a graph that’ll help you in understanding the countries that just can’t get enough of this app. 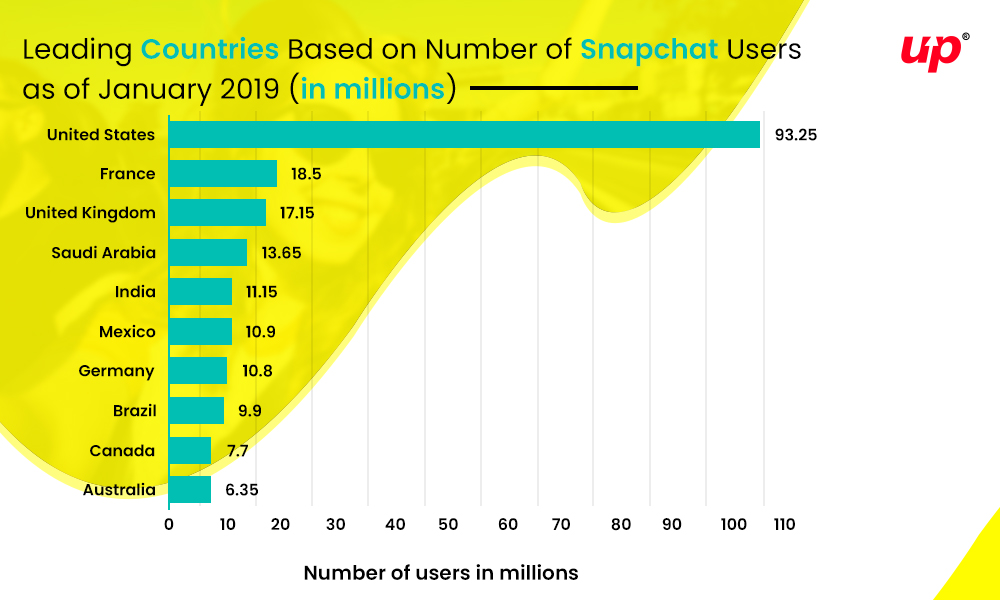 As you can see that the USA is currently leading the way when it comes to having the most number of active users.

Some useful statistics about Snapchat:

61% of Snapchat users are female

As per a survey, 41% of US teenagers stated that Snapchat is their preferred social media platform.

Specifically, in the USA, Snapchat has reached 53.4% of the mobile audience.

Before we move any further in discussing the estimated amount of making an app like Snapchat, let’s dive into the services this app provides. Apparently, these services will              help you understand the features which you too can use in your app.

This feature lets you record and share videos in one sequence, rather than having to build your stories out of individual videos. You can record videos up to 60 seconds in total.

With SnapMap, you can see where your friends are and what they are up to. It’s not something where you can find directions; instead, it can locate your friends.

It lets you share the selected story to groups of people. Just tap “create a  story” to get things started. From there you can create three stories at once.

To get started all you have to do is just tap on the speaker icon at the bottom of the screen and select from a range of character voices to give your story auditory style.

Being the most preferred social media platform especially in the USA and Europe, Snapchat has shown an immersive growth in its Q1 2019 earnings reports. According to that, it reached 190 million daily active users, which shows us the growth percent from 186 million in its report from Q4 2018.

The business model of Snapchat totally depends upon the features that we    just mentioned above. However, it’s as similar to any other social media platform, it’ all about trends. Whether it’s a movie or a big gig/event, Snapchat always makes sure to give you an incomparable experience. 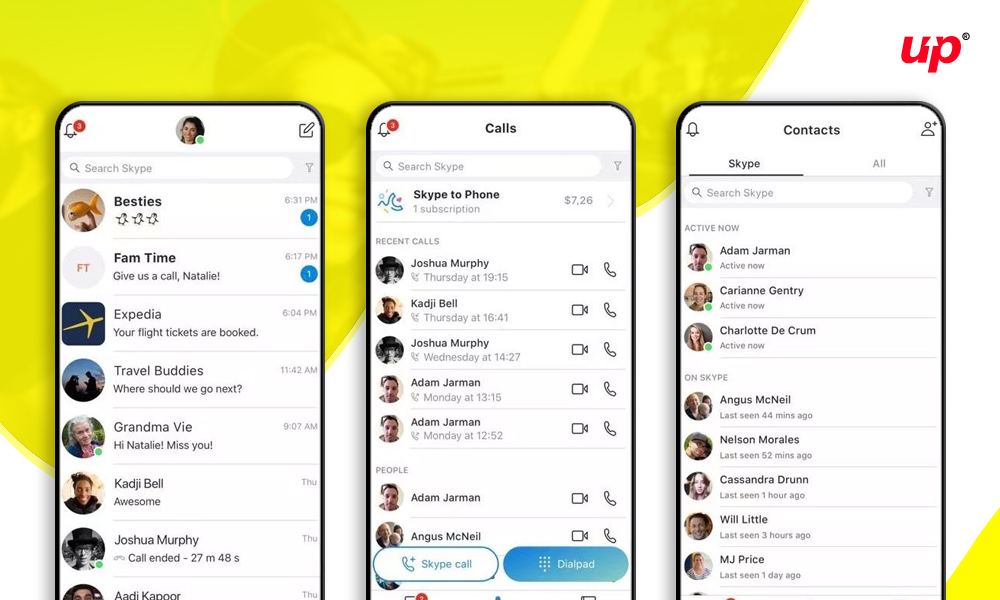 In order to so, all you have to do is just follow the steps that we’ve mentioned below:

First and foremost, you need to run a research on the market to identify your competitors

Discover your target audience to understand exactly what they want.

Make sure to create a list of feature for your Snapchat-like app.

Define the platform on which you want to build the app.

Find a team or hire an app development company.

Features That You Must Add In Your Snapchat Like App

This is Snapchat’s primary feature that first and foremost you need to add in your app. users really enjoy the process of exchanging cool self-destructing snaps and appreciate the possibility to their media messages with an array list of filters. So, make sure to provide them with that.

It is a fact that Snapchat is all about sharing photos and videos, and we cannot ignore that messaging is still a priority. Without attaching a piece of text in a particular snap, it’ll turn out to be more out of context and obviously boring.

To make your conversations more interesting and humorous, most of the chatting services provide their users with a lot of bright stickers which evidently had made an impact on how we communicate online. So, if you are making an app like Snapchat, don’t ever forget about adding stickers.

Snapchat initially offers an excellent feature that lets you take control over some hilarious animations. Moreover, these lenses are changed quite often to keep things fresh and to maintain constant curiosity among the users.

This feature, in particular, is quite new in Snapchat and believe it or not, this has made the app more functional and productive. Being a top-rated social media platform, Snapchat has always tried had to make things better for their users. 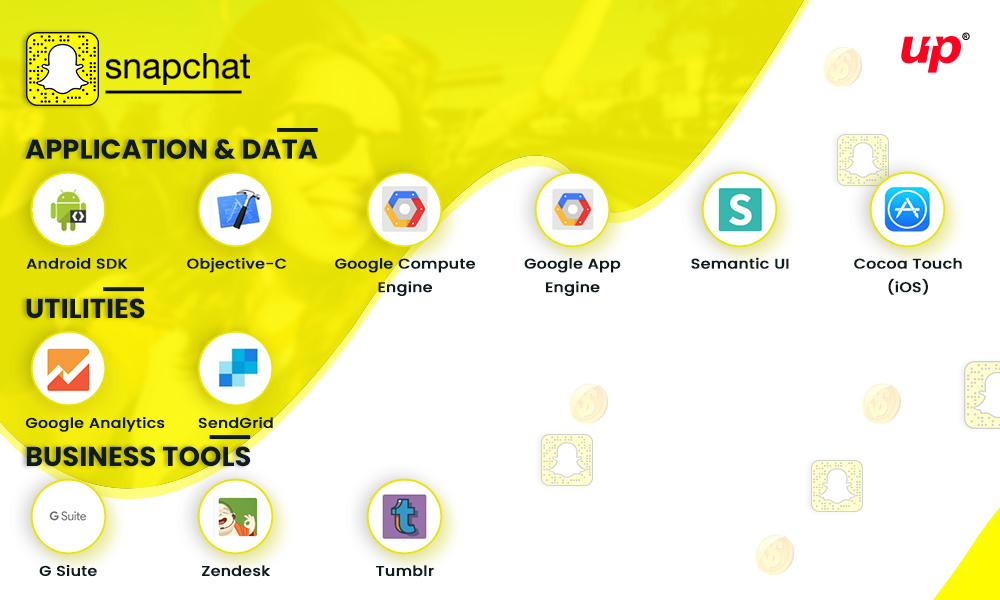 How Much Money Is Required To Make An App Like Snapchat?

Social Media is one such industry on which companies are willing to invest their fortunes. What it means is that big enterprises are doing the best they can in order to introduce their own social media app in the market. With that being said, Snapchat, which is highly popular among the youth, companies are willing to launch a competitor app as well.

Being a top-rated app development company in the industry, Fluper has years of experience in fulfilling its client’s needs in the best way possible. As far as the estimated cost is concerned, we can build a Snapchat like app somewhere in between 15,000$-18,000$. However, you should know for the fact that this is an estimate that can fluctuate on the basis of your needs and demands.

Developer’s Rates around the World

So, if you’d like to make an app at a reasonable cost, then heading over to India might be the best idea.

Since the time of our debut in this industry, we’ve been the number one choice for most of the industries when it comes to making apps. Till this date, we’ve successfully fulfilled 300+ business requirements. Being a platinum Google app developer company, Fluper is a proud partner with NASSCOM and IBM. So, wait no more, head over to Fluper to avail our services to make an app like Snapchat.

What Benefits Do We Offer?

You will also get 9 Months of Free App Promotions

Get up to 2.5 Years Complete App Support

Are you fed of searching the best app development company that can help your company to grow? Well, if that’s the case, we are glad to tell you that this is the right place to look at. Our developers can help you out in literally no time. 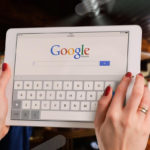 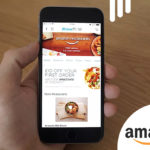 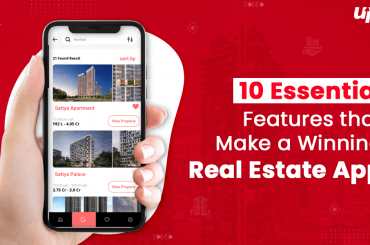 Cost to Build a Video Streaming App like Netflix 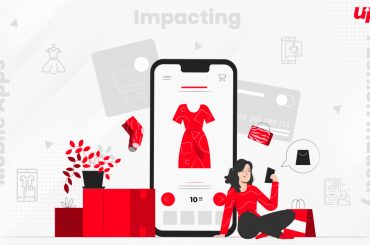 How Much Does It Cost to Develop a Pickup and Drop App?