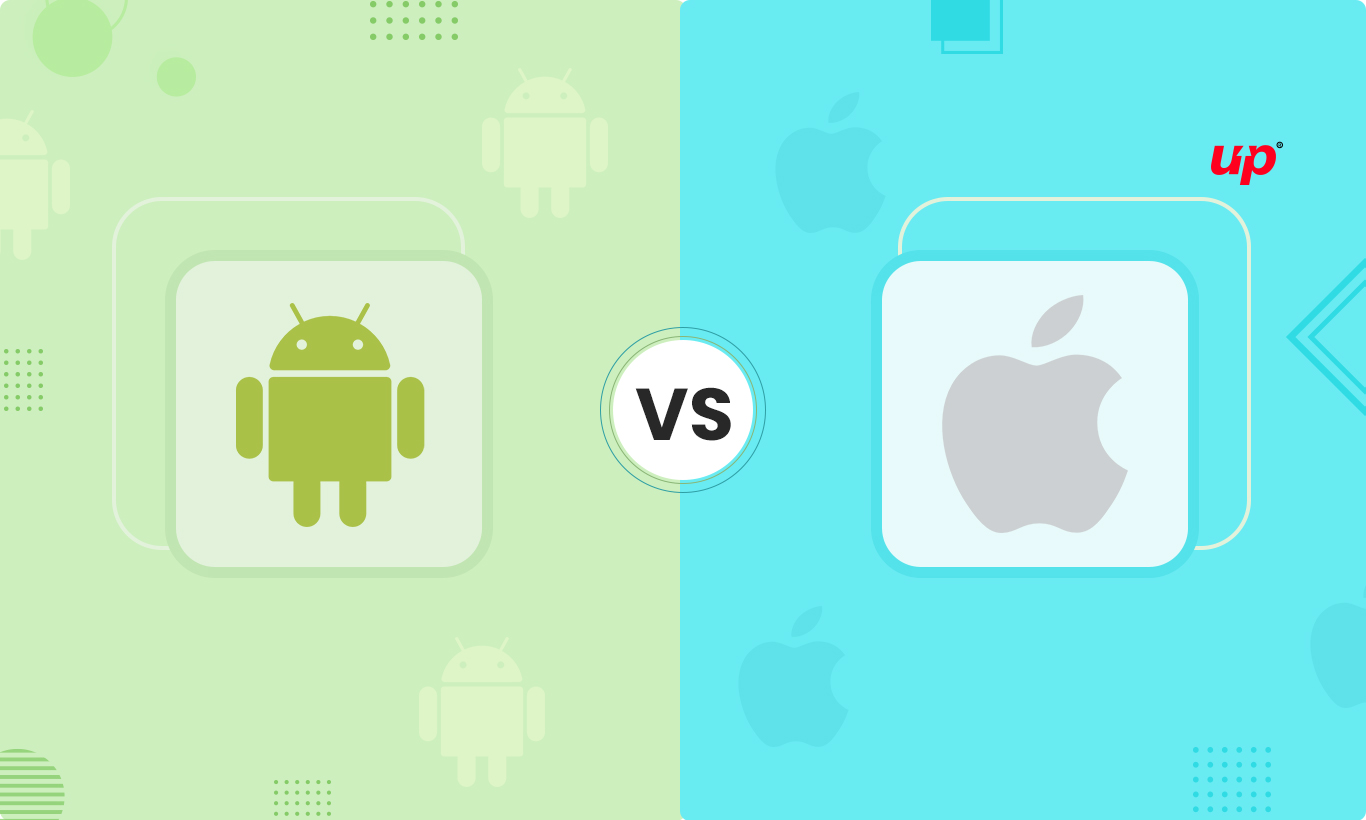 With more than 2.7 billion Smartphone users in the world and over 2 million mobile apps on various app stores, it is clear that mobile apps have made our lives too easy. In fact, as per a report, we spent 90% of our mobile usage time on apps only. This encourages entrepreneurs and companies looking to enhance their business with the help of mobile app development.

Have a look at some statistics below

57% of all digital media usage comes from mobile apps only.

Every Smartphone owner uses 30 apps on an average each month.

Surely the statistics are great, especially if you are looking to have an app developed. But here lies the main problem of most businesses and startups-which platform to choose for development, iOS or Android? Well, in this blog, we will dig deep and discuss all the important points that will help you make a well-concerted decision.

If you are planning to get your app developed by a Mobile App Development Company, it is obvious that you will look at the market share and opportunities to generate revenue. Android apps are present in large numbers compared to iOS applications. The reason for this lies in the higher number of Android phones. In 2017 only, about 86% of Smartphone sold to users worked on Android OS as mentioned in the below graph. Moreover, there are 2.1 million Apps on the app store while 3.5 million on Google’s Play store for users to choose from. 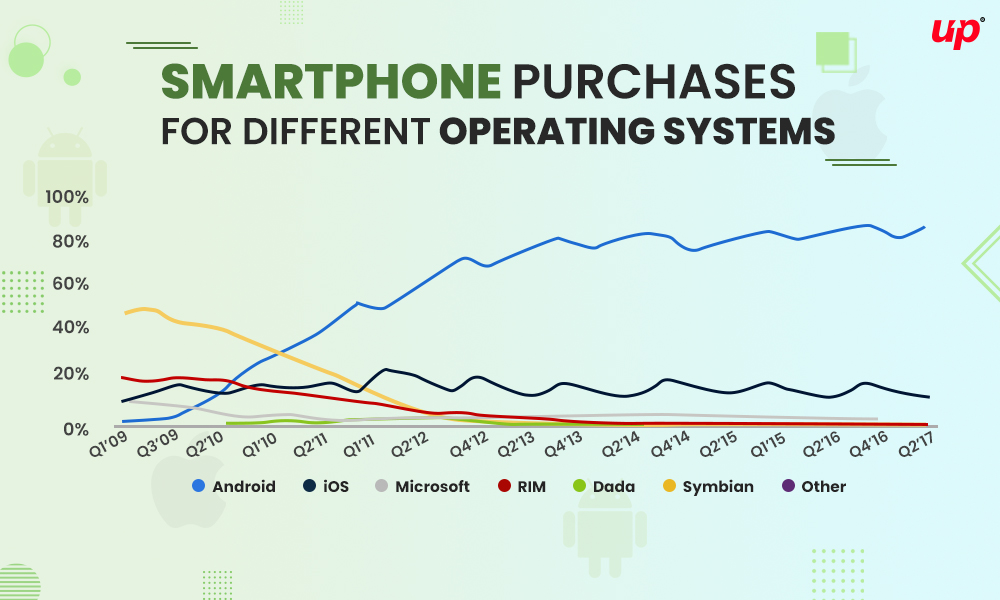 As a Top Rated Mobile App Development Company, we can say one thing that the businesses prefer having a comprehensive app development language. Java and Kotlin are the Android programming languages with Kotlin being interoperable with java leading to faster development. There is no drawback of java; the only thing is that it takes comparatively longer time to write code.

While for the iOS platform, Swift and Objective-C are the prime languages. Meanwhile, Objective C has gone old, thus leading to Swift being the main programming language for mobile app developers due to its ability to write lesser lines of code.

For building Android apps, generally, Mobile App Developers prefer to work on tools like Android Studio, or Eclipse. Android studio especially has become the most favorite development environment as it is easier to package apart from having great debugging abilities.

iOS developers generally prefer Xcode or AppCode for creating apps for Mac/iPad/iOS devices. Since most businesses want to get cross-platform apps, either Xcode or Android Studio should be the first choice to build apps for either platform. In Case you want to get Cross-platform app development, then you can consider going with Frameworks like Flutter.

While designing the app, there are certain things to be considered. We call it as design principles. These design principles should surely be looked at before you decide to go with any Android or iOS Application Development Company in UK.

Have a look at some design principles which must be taken into account:

As there are various Android Devices of varied screen sizes and resolutions, it makes designing a bit time consuming as all devices have to be taken care of. Meanwhile, iOS-powered devices have to be designed for a significantly lesser number of devices (iPad, iPhone, etc) and screen resolutions.

Both Android and iOS have a difference in the way its user interface looks like. For instance, the status bar where information like time, network connection, battery charge, and other information are placed is one core navigational component. In both iOS and Android, there is a difference in the way things are arranged or presented. Whether it is navigation or it is typography, every app feature is present in a different way in both the apps.

Development and testing go side by side in both iOS and Android app development. As there are more devices to be tested and developed for in Android app development, it is hence both times consuming and complex. Moreover, Android devices screen size and resolution varies from that of iOS and takes more time in both developing as well as testing. 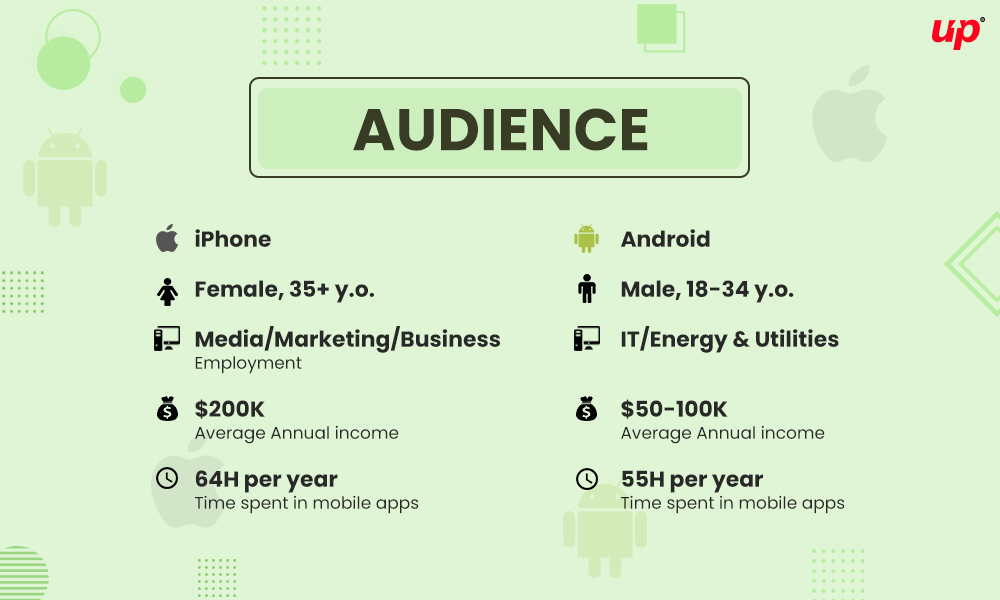 Not only the size of the audience but also the insights need to be explored before you begin making your marketing campaign or decide for the development platform. Though Google presently holds an advantage over iOS in terms of the audience number, it is the audience information that is a must to be considered which includes user’s age, gender, annual income and time spent on devices.

There is a reason why apple supported apps are lesser in number than that of the Android platform and still earns nearly double the revenue compared to Android. The reason is clear; the app store makes it a bit difficult to get your app launched on it. This is why more developers prefer Android in the beginning and then switch to the iOS platform due to higher revenue generation. 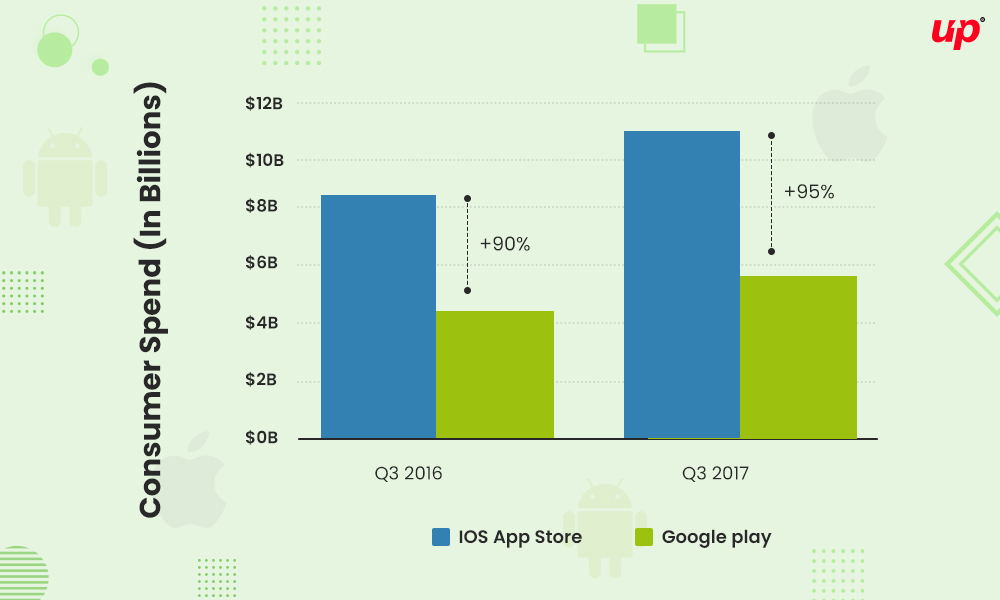 Primarily Apple focuses on getting revenue through in-app purchases while Google’s Android apps generate revenue through Advertisements. Have a look at the revenue generated by both app stores in the graph below.

As a leading Android Application Development Company in UK, Many of our businesses ask the very first questions as to what is the exact cost of app development on both platforms.

For Android apps, automated testing is done to check the application whether it is fit to be accepted or not. While for iOS apps, once they are sent for review, it takes around 7 days time which is done on a personal basis thus leading to more rejections.

iOS v/s Android: Have You Chosen your app Development Platform?

If you have not yet decided as to which platform you shall go with, then here is the final key advice from our end to help you make a great decision for your future app development needs.

iOS app development costs are lower and affordable provided your app is built with exciting features.

As a Startup, if your aim is to reach a higher number of audience, then you can go for Android app development.

If as a business, you have a better Mobile App Development partner then you can consider going for iOS app development as it brings more influencers, which leads to             more clicks.

At last both iOS and Android brings many opportunities for businesses to get successful and generate higher revenue. But while you are selecting a platform for development, it is important to have a look at some detailed differences. This will give businesses an insight into app development and will enable them to differentiate between these two.

Have an app idea? Let Fluper, a leading iOS, and iPad Application Development Company in UK know about it to get a free wireframe for your project. 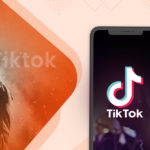